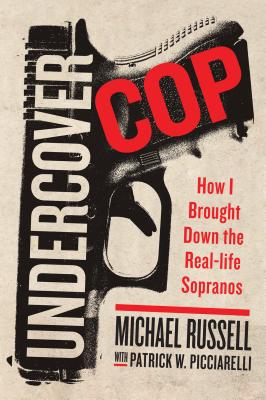 Undercover Cop: How I Brought Down the Real-Life Sopranos

One moment, New Jersey state trooper Mike Russell was working undercover, playing the role of an up-and-coming mobster hoping to infiltrate a Mafia family crew. The next, he was lying facedown in an alley after being ambushed and shot in the back of the head by a mobster over a dispute.

Russell miraculously healed, and rather than press charges, he maintained his cover. Soon he had a stroke of good luck when he saved a man from an attack by two street thugs. The man he saved turned out to be Andy Gerardo, one of the ranking captains of the Genovese crime family. Quickly earning the trust of his new friend, Russell would orchestrate one of the biggest Mafia takedowns of all time.
Urged by his police handlers, Russell used his cover story---an ex-cop fired for excessive force who now made his living from an oil-delivery business---and street skills to assimilate into the Genovese crime family in New Jersey, ultimately leading to more than fifty arrests of mobsters, corrupt prison officials, and even a state senator. Straddling the thin line between collecting evidence and participating in the very crimes he was leaking to the cops, Russell consistently placed himself at risk--especially when his police handlers disregarded his wishes and his well-being, conducting premature raids on the gangsters. With his marriage suffering and his family in danger, Russell took extraordinary steps to ensure his financial security and safety, demanding better terms from the police and allowing a film crew to document the final moments of the epic bust for a documentary that was later sold to HBO.
A real-life version of "The Sopranos," "Undercover Cop" immerses readers in the colorful yet harrowing trials of a standout cop who faced the mob on his own terms, crippled organized crime in New Jersey, and forever redefined undercover law enforcement.

Title: Undercover Cop: How I Brought Down the Real-Life Sopranos

Undercover Cop: How I Brought Down the Real-Life Sopranos