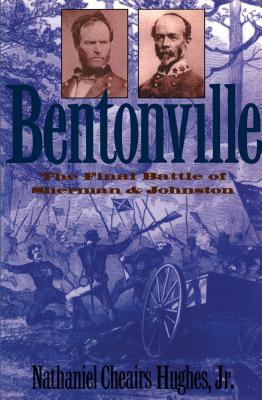 The battle of Bentonville, the only major Civil War battle fought in North Carolina, was the Confederacy's last attempt to stop the devastating march of William Tecumseh Sherman's army north through the Carolinas. Despite their numerical disadvantage, General Joseph E. Johnston's Confederate forces successfully ambushed one wing of Sherman's army on March 19, 1865 but were soon repulsed. For the Confederates, it was a heroic but futile effort to delay the inevitable: within a month, both Richmond and Raleigh had fallen, and Lee had surrendered.

Nathaniel Hughes offers a full-length tactical study of this important battle. In careful detail, he lays out Confederate and Union troop movements and places the engagement within the larger military framework of the last months of the war. Analyzing the reasons for the initial success and eventual failure of Johnston's offensive, he maintains that Sherman showed great restraint by remaining committed to the larger goal of reaching Goldsboro rather than stopping to pursue or destroy the defeated Confederates.

Description: Clean text and tight binding except for a date written in ink on the front free endpaper and mild foxing to the textblock. Ships from Richmond, VA. NOT ex-library, BCE or remaindered. Order before 2PM EST any business day, we'll ship it same day with FREE tracking. Promise.